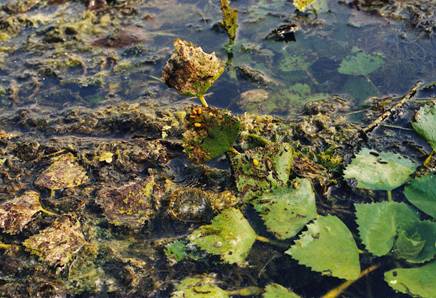 Thanks to funding provided to the New York Invasive Species Research Institute at Cornell University by the New York State Department of Environmental Conservation, Dr. Bernd Blossey, Associate Professor, will be able to advance critical research on the biological control of water chestnut (Trapa natans) by the leaf beetle Galerucella birmanica.

In collaboration with Chinese counterparts, Blossey and his research team have identified G. birmanica as a strong candidate for controlling this highly invasive aquatic plant. The new funding will allow Dr. Blossey and his collaborators to test the beetle for host specificity in quarantine, a crucial step towards its approval for release by the Technical Advisory Group (TAG, within USDA/APHIS). If approved for release, protocols will be designed for assessing the effectiveness of G. birmanica agents using citizen science, and demographic models will be developed for water chestnut (T. natans).

Water chestnut, an aquatic plant native to Eurasia, has been spreading across the waterways of New York State since its introduction in the late 1800s. It thrives in shallow lakes, ponds, and slow-moving rivers, forming dense vegetative mats that cover the surface. Expansive colonies prevent light from reaching the bottom of waterways, compete with native vegetation, and impede recreational activities such as swimming and boating. Currently, control of water chestnut typically involves mechanical and manual removal, which is costly and difficult in cases of large populations with established seed banks.