From University of Florida IFAS News

GAINESVILLE, Fla. — Researchers with the University of Florida Institute of Food and Agricultural Sciences have found that newly identified fungal pathogens may suppress an aggressive, invasive grass that is spreading throughout the eastern United States.

Luke Flory, an assistant professor of ecology in the agronomy department, and his team visited more than 80 sites in 18 states and conducted a multi-year field experiment. They documented the recent emergence and accumulation over time of new fungal pathogens. Flory’s results also show that the pathogens have the potential to cause declines in populations of the invasive grass, also known as Microstegium vimineum.

While researchers have thought that invasive species may eventually be controlled by pathogens or parasites, this is the first documented example of it occurring. Though researchers are excited that the newly discovered fungal pathogens appear to be suppressing the invasive grass, scientists don’t know if the new pathogens will harm other species such as native plants, crops, or turfgrass. “We don’t know if the fungal pathogens will just control the invader, or if they will also affect co-occurring plant species,” he said. “The next step is to determine how these pathogens will affect invasive and native species over the long term.”

Flory’s research was funded by the National Science Foundation, and will be published in the journal Ecology Letters.

Read the paper in Ecology Letters. 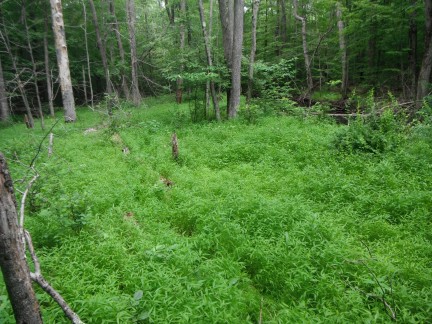